Pachygyria is considered a subtype of lissencephaly which, in turn, is a spectrum of disorders caused by abnormal neuronal migration. Clinical presentation in this disorder may be varied including microcephaly, developmental delay, facial dysmorphism, seizures, and mental retardation. Magnetic resonance imaging (MRI) of brain identifies the exact nature and extent of the disease and helps in delineating further plan of management. A Tigroid pattern on axial MRI scan and leopard pattern on a sagittal plane has been classically reported in disorders of myelin formation such as metachromatic leukodystrophy and Pelizaeus-Merzbacher disease. We present here a case of pachygyria who presented to us with some atypical features including “tigroid-like stripes” and “leopard-like pattern” on MRI brain which has not been reported in the medical literature previously.

Neuronal migration disorders are diseases that develop due to disruption of normal movement of postmitotic neurons from the ventricular zone to the cortical plate during embryogenesis that result in the total or subtotal absence of cortical sulci and severely disturbed architecture of the cortical plate. [1] However, the location of these neurons along their migratory route and its severity, which also forms the basis of classification of these anomalies, depends on the pathological mechanism of the disorder. [1] These disorders have been discussed classically under umbrella of lissencephaly, which means “smooth brain.” In agyria, there is absence of deep sulci in more than one lobe and the thickness of the cortex is 10-20 mm, whereas in pachygyria sulci are present but are wider than in the normal cortex. [2] In addition, the affected cerebral cortex has only four developed layers instead of the normal six layers. [2]

Pachygyria is currently considered a subtype of “Lissencephaly spectrum of disorders” which ranges from classical lissencephaly (agyria or pachygyria), in which microscopic examination reveals total disorganization of the cortex and absence of any distinguishable layers to subcortical band heterotopia or double-cortex syndrome. [2]

Although exact incidence of this disorder is not known, the incidence of all forms of Type I lissencephaly is estimated to be 1 in 100,000 births. [3] Clinical presentation may be varied including microcephaly or normal head circumference, facial dysmorphism including esotropia and/or exotropia, telecanthus, seizures, mental retardation, and hypotonia with or without pyramidal and cerebellar signs. [4] Mutations of several genes such as LIS1 and DCX have been reported in neuronal migration disorders. [1] Historically, neuronal migration disorders have been classified based on a postmortem examination; however, mainstay of diagnosis and classification of these disorders is currently based on magnetic resonance imaging (MRI) of the brain. [2] Thus, knowledge of typical and atypical MRI findings in these disorders may be of utmost importance in delineating further plan of management including preparation of treatment paradigms and selection of correct investigation panel, especially for genetic studies. Here, we present a case of pachygyria who presented to us with some atypical features including “tigroid-like stripes” and “leopard-like pattern” on MRI brain which has not been reported in the medical literature previously.

A 12-month-old boy belonging to a Hindu family born as a first child, and a product of non-consanguineous marriage, a full term normal delivery and without any history of prenatal or perinatal complications presented to our outpatient department with a history of global developmental delay and infantile spasms since the age of 6 months. He was able to sit with support since 10 months of age, developed social smile at the age of 9 months and was not able to utter any sound at the time of presentation. At 6 months of age, his parents noted sudden onset epileptic spasm of flexion and extension (mixture) type which occurred initially just on awakening. However, the frequency of these attacks had increased for last 2 months to around 5-10 episodes per day. These attacks now occurred in clusters throughout the day, and each episode lasted for 3-5 min. There was no family history of similar illness. On examination, his head circumference was normal for age (46.5 cm). Tone in all the extremities was normal and deep tendon reflexes were normally elicited, however, plantar was bilaterally extensor. Rest of the general physical and systemic examination was unremarkable.

Laboratory investigations including routine hematological and biochemical investigations were normal. MRI of brain showed frontal predominant pachygyria, periventricular, and bilateral frontoparietal symmetric hyperintensities along with “tigroid-like stripes” or “reverse tigroid pattern” (T2-weighted sagittal image showing radial stripes) [Figure 1], [Figure 2], [Figure 3]a and b and “leopard-like appearance” – scattered dots in form of hyperintensities on a normal background white matter [Figure 3]c and d. Fluid-attenuated inversion recovery image [Figure 2]c showed hyperintensities in bilateral subcortical white matter suggesting myelination abnormality and ruling out the enlargement of perivascular space as a cause of this appearance. Awake electroencephalogram showed background activity of high amplitude polymorphic delta wave with multifocal spikes [Figure 4]. Urine examination for metachromatic granules was negative, and serum aryl sulfatase was also normal. His G-banded karyotype was normal. We also performed MRI brain of the parents to look for any malformation which turned out to be normal.

Figure 1: 12-month-old boy presented to our outpatient department with a history of global developmental delay and infantile spasms since age of 6 months diagnosed as a case of pachygyria. (a and b) T2-weighted axial images show hyperintensities in periventricular (single arrow) and bilateral frontoparietal region with frontal predominant cortical thickening (double arrow) with paucity of sulci favoring cortical dysplasia with pachygyria. 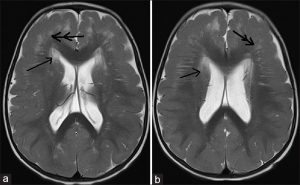 Figure 3: 12-month-old boy presented to our outpatient department with a history of global developmental delay and infantile spasms since age of 6 months diagnosed as a case of pachygyria. T2-weighted sagittal images (a and b) show radial stripes (single arrow); (c and d): show scattered dots in form of hyperintensities on a normal background white matter (double arrow) -“leopard-like appearance” along with a normal appearing cerebellum 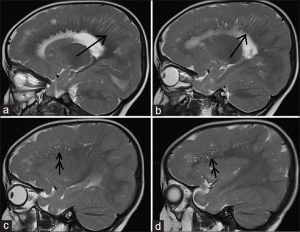 Figure 4: 12-month-old boy presented to our outpatient department with a history of global developmental delay and infantile spasms since age of 6 months diagnosed as a case of pachygyria. Awake electroencephalogram of the child shows background high amplitude polymorphic delta wave activity with multifocal spikes. 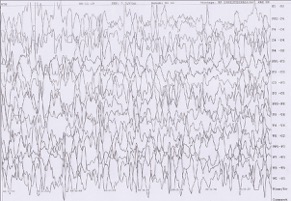 Treatment was started with intramuscular injections of adrenocorticotropic hormone (ACTH). Initially, he received 40 IU of ACTH per day by subcutaneous route for 2 weeks followed by tapering off over another 2 weeks. Apart from that, the patient was also maintained on sodium valproate at a dose of 200 mg/day which he was receiving before presentation to our center. He did not develop any major complication on ACTH treatment.

There was an overall clinical improvement with respect to frequency of spasms which decreased to 1-2 per day after about 6 weeks of initiation of therapy. The patient was also counseled for trial of vigabatrin and corpus callosotomy. Currently, he is in close follow-up and further management paradigm is to be planned according to the clinical progression and evolution of the disease.

There are three stages of development of the cerebral cortex: Cell proliferation, cell migration, and cortical organization. In the stage of cellular proliferation, both the neuronal and glial precursors are generated; during migration, these cells travel from the proliferative zone to their final designated destination and during the stage of cortical formation there is formation of the cellular network. [1] Lissencephaly is classified into two types – (a) classic (Type I) lissencephaly (4-layer lissencephaly), in which there may be a smooth brain surface in the complete form, or more commonly, a smooth surface with some gyral formation along the inferior frontal and temporal lobes in the incomplete form resulting from arrest of the neuronal migration process and (b) cobblestone (Type II) lissencephaly (congenital muscular dystrophy), which is characterized by a nodular brain surface, ocular anomalies, and congenital muscular disorders which results from over migration of the neuroblasts and glial cells beyond the external glial limitations into the subarachnoid space. [1]

As lissencephaly is a broad spectrum of disorders, a severity scale has also been proposed to classify various disorders under this heading; lower grade signifies more severe disease. Lissencephaly Grades 1 and 2 consist of diffuse agyria; however, patients with lissencephaly Grade 2 generally have a few shallow sulci over the frontal or occipital pole. Grade 2 anomaly is additionally seen in Miller-Dieker syndrome (caused by microdeletion of 17p 13.3), in which the child presents with a combination of lissencephaly with dysmorphic facial features, visceral abnormalities, and polydactyly. Lissencephaly Grade 3 comprises of mixed agyria and pachygyria, and Grade 4 comprises only of pachygyria. Grade 5 includes mixed pachygyria and subcortical band heterotopia, and Grade 6 comprises only subcortical band heterotopia. [2] Our case had only pachygyria, so it gets classified under Grade 4 lissencephaly.

Mutations of many genes have been reported in neuronal migration disorders such as LIS1 on chromosome17p13.3 and DCX on Xq23 in classical lissencephaly spectrum. [1] RELN and VLDLR genes have been found to be contributory in lissencephaly with cerebellar hypoplasia. [2] ARX has been found to be mutated in X-linked lissencephaly with abnormal genitalia which often also result in lissencephaly Grade 3, in addition to the basal ganglia, white matter and callosal abnormalities, [2] and similarly, TUBA1A mutation results in micro lissencephaly with agenesis of the corpus callosum. [1] The location of lesions also sometimes depend on the genetic factors such as mutations of LIS1, ARX, or TUBA1A result in a posterior more severe than anterior gradient, while mutations of DCX or RELN lead to an anterior more severe than the posterior gradient of abnormalities. [1],[2]

Although microcephaly can be frequently noted in patients of pachygyria, normal head size as seen in this case and predominant frontotemporal pachygyria has been previously reported in the literature. [5] Kurul et al., described MRI findings of cases with localized pachygyria; six cases had bilateral frontoparietal agyria-pachygyria, and five of their cases had bilateral frontotemporo-parietal agyria-pachygyria. [4] Similarly, developmental delay, focal or generalized seizures, and infantile spasms have been described in the literature. [4]

The typical “tigroid pattern” on axial MRI or “leopard pattern” on the sagittal plane is marked by symmetric diffuse high signal intensity on T2-weighted images in the cerebral white matter with radially oriented stripes of low signal intensity. It has been reported classically in disorders of myelin formation such as metachromatic leukodystrophy (MLD) and Pelizaeus – Merzbacher disease (PMD), where it results due to sparing of dysmyelination along the venules. [6] The hallmark of imaging in MLD is symmetrical dysmyelination in the periventricular white matter and centrum semiovale with sparing of the subcortical white matter. MRI in PMD shows diffuse hyperintensity in the central white matter of the cerebral hemispheres, cerebellum, and brain stem along with reduction in white matter volume. [6] Similar pattern has also been reported in globoid cell leukodystrophy and infantile GM1 gangliosidosis in which it is less prominent. [7] It has also been reported in Alexander disease (AD) [8] and Lowe syndrome. [9] AD is another disorder of white matter due to mutations in the gene encoding for the glial fibrillary acidic protein resulting in progressive motor and mental retardation, seizures, and megalencephaly. MRI is characterized by diffuse white matter involvement with frontal predominance. [8] Lowe (oculocerebrorenal) syndrome is an X-linked recessive disorder characterized by cognitive developmental delay, congenital cataract, glaucoma, and Fanconi syndrome. [9]

Presentation of agyria-pachygyria, a lissencephaly spectrum of disorders can be varied including normal head circumference or microcephaly, developmental delay, facial dysmorphism, seizures, and mental retardation. MRI of the brain is thus of immense value in identifying the exact nature and extent of the disease and also helps in delineating further plan of management. The tigroid pattern on axial MRI and leopard appearance on sagittal MRI is classically reported in disorders of myelin formation such as Metachromatic Leukodystrophy and Pelizaeus-Merzbacher disease More Details. Nevertheless, these are not always sine qua non of disorders of dysmyelination, as “tigroid-like stripes” or “reverse tigroid pattern” can be found in disorders of neuronal migration as well. In future, the presence of these signs on MRI brain may be helpful in keeping this possibility in mind, especially in cases of mild pachygyria which can be occasionally missed otherwise.

There are no conflicts of interest.

This website is a resource for families with special needs and to let other parents with children who have mild pachygyria know their child can have a full life expectancy.